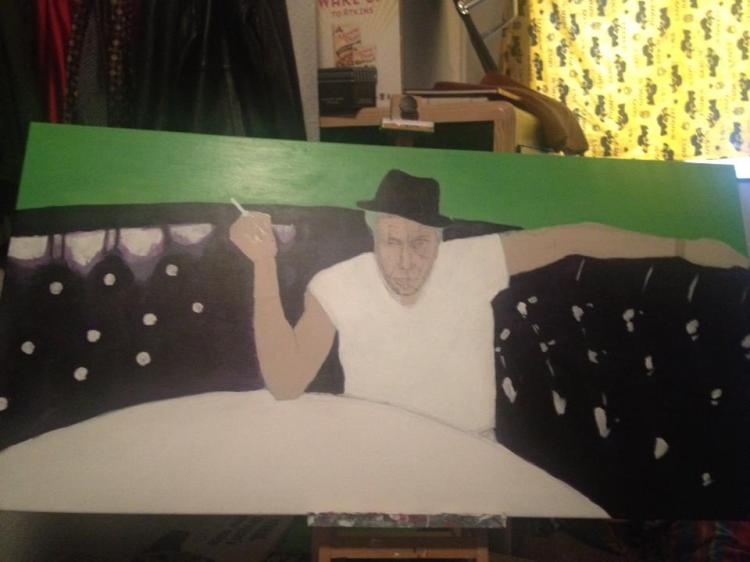 I’ve wasted two hours working on this painting tonight. The left side of the seat he’s sitting on is kicking my ass for some reason. That and I don’t have his face right.

Art is hard.  At least my hands are all sorts of pretty colors.

The Rough Men Stand Ready Anthology was a success and it’s easy now. All I have to do is get up in front of people and read ten minutes worth of the Haiti story. We had a blast and we made a thousand dollars toward the next anthology. One of the men there donated $500. Good stuff for A Rock of Something.

I’m also having a hard time finishing this zombie apocalypse one-act play. I’m 8 pages in and probably should end it at 12 pages. Not sure what to do about that. It’s sort of a Waiting for Godot sci fi comedy metaphor on society. So, yes, pretentious as all hell, but witty enough.

I did finish this small flash non-fiction piece last night while drinking Bulliet Bourbon and listening to Tom Waits. It’s about when I was drinking heavy after the war and woke up naked in someone elses bathroom. Fun times. 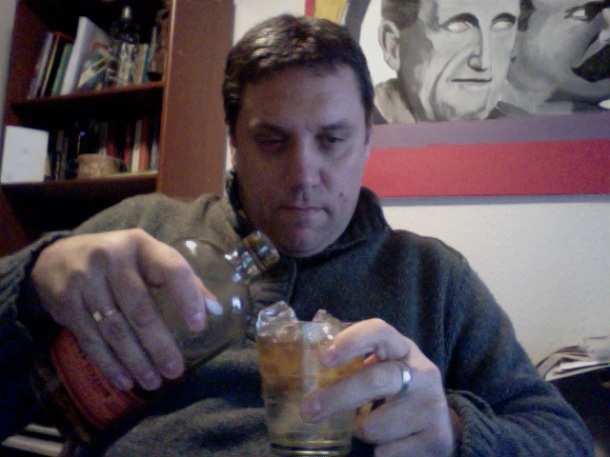 I sent the rough, rough draft of this little story to Kase and Andrew in the middle of the night along with this picture of Hemingway kicking a beer can into the snow.

Yeah, even with all the projects I have going on I feel like this. Maybe I’ll go to bed and read some Floyd Skloot. I’m not too into his prose, but he does have one of the coolest names in literature. I’m lucky to be on a panel with him next weekend. I read a book or two written by the other members of the panel as well. I always try to do that. Although they can’t really do that with mine. They will never share the secret of Ian Avi. I don’t know. It wasn’t a bad book, just badly written. Maybe I’ll turn it into a movie.