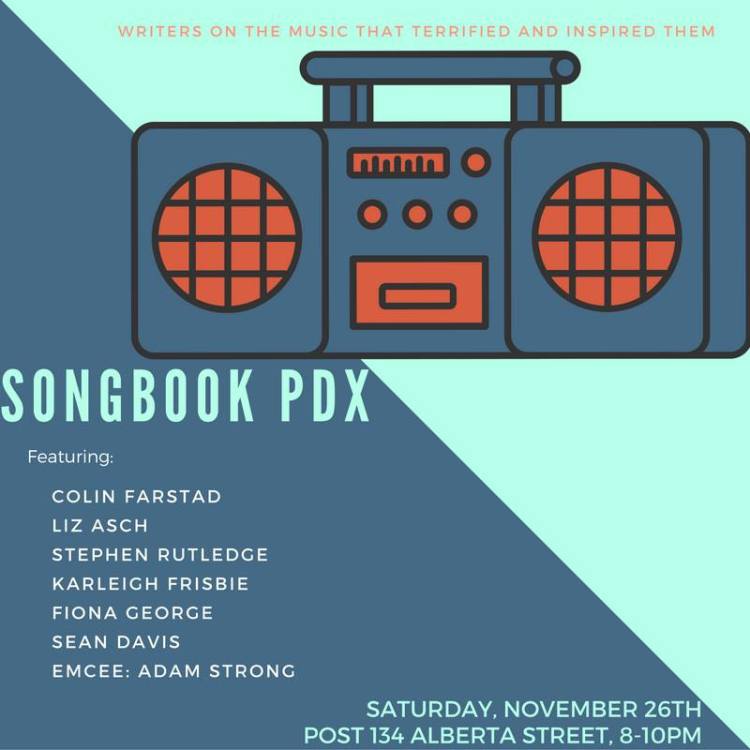 Songbook PDX is an amazing reading series held at Post 134 in the Alberta Arts District. It is moderated and curated by Adam Strong. I had the opportunity to read. I love Songbook PDX because it forces you to write. In many of the reading series you can get away with bringing something you’re confident about and read it. This one, you have to write about a song that terrified or inspired you and the chances are pretty good that you don’t have something like that lying around.

First you have to pick a piece. I had Leonard Cohen in my head, then Tom Waits, and then Queens of the Stone Age and so much more. But I finally settled on a song that helped form who I am today, a song I first listened to during an experience that helped form who I am today. I chose to write most of it in second person so it would contrast with the first person of the song lyrics.

It was only after I was done that I realized that I had written a poem, or maybe at best a prose/poem. We had a great time and if you get the chance you should stop by, talk to Adam, and be a part of this series.

You’ll be a beautiful confusion. Once I was you.

He was born with the curious habit of collecting responsibilities. It’s not like he really searched for them and he didn’t really ask for them, but he was burden-born with a strong back: two little brothers in a world without parents, he became the dad. A childhood without a family, he tried to start one with a high school girlfriend. Then the military. Then Fatherhood.

At his last duty station in Germany, during his second tour, the wife took the kids and moved in with another man. The family left him. A few months later the army was done with him and sent him back to the States while his ex and kids stayed with the other guy. He got out to find his little brothers grown up and for the first time he was left to choose. All the decisions in his life, all the big ones anyway, had always just happened to him. For the first time, he felt, the choice was his, so he chose the most abstract. He chose art.

She was a friend of a friend, they met at an art-school house party on Southeast Belmont, someone’s dirty living room, sticky couch cushions, beer cans and bottles on every flat surface: full, half full, empty. Unframed art and charcoal drawings tacked or taped to the walls. Canvasses of different sizes sat in piles: finished, half finished, empty. A small group in the kitchen laughed and coughed the place full of the comfortable smell of pot until someone lit a Nag Champa. She smiled at him and without breaking eye contact he chose to walk straight to her through the chaos of the room, and without a word, kiss the beautiful blue-eyed girl with big dimples and long brown curly hair.

I saw you caught between – all the people out making a scene.

In a bright, ideal tomorrow. Don’t go too far, stay who you are.

Intricate and colorful tapestries hung on her walls and ceiling. She closed the door and turned the lock before gliding across her room to her stereo to drown the party outside. Two candles lit, a few graceful movements, and she stood as a monument to her own sexuality. He marveled at her confidence, beauty, and capriciousness. Full breasts curved into her flat stomach, she turned and stepped to the bed. He noticed dimples just above her ass in the small of her back. He knelt, held her, and in the background Elliott Smith sang.

Everybody knows, you only live a day, but it’s brilliant anyway.

The art school girl, the city, the wild nights, all became this amazing independence he’d never felt: his first beautiful things. He fell in love with all of them. The next morning she made coffee in a French Press, she spoke about yoga, alternative milks, and the avant garde. Yes, she was weird, the city was weird, but just as Francis Bacon says, there is no true beauty without a touch of strangeness in its proportions.

It couldn’t have lasted between the two and it wasn’t supposed to. Relationships are hard. Everything we do is ambiguous, every action uncertain. Every verb that has anything to do with the human body is also a noun. And each carries an ocean of meaning depending on how it’s used.

A Hold. To Hold

To Talk. A Talk

A Kiss. To Kiss

Caress, Love, fuck, they’re all verbs and nouns. Every action and interaction between two people have at least more than one meaning. No wonder we fuck it up so much.

I saw you out. A perfect place. It’s gonna happen soon. But not today.

He dropped out of art school and returned to collecting. He reenlisted in the army. He remarried his ex-wife to be there for the kids. He took care of his mom and brothers when they needed a place to live. But the beautiful things and his time loving them wasn’t wasted. The Giant Sequoias, the redwood trees, they have cones that need a wildfire in order to release their seeds so they can grow and the first taste of true independence became seeds that would grow into who he would eventually become. Experiences he had later in life, the war, heartbreak, the flood, became the fire those seeds needed.

He never stopped collecting, but today he chooses what to collect and most are beautiful things. He lives in his city. He practices his art.

So go to sleep