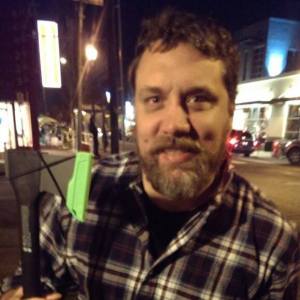 I wanted to say how excited I am to be in the forthcoming anthology from Forest Avenue Press. I thought since it’s Halloween I’d give a small preview of my story: The Fixer: A Serial -1- The Duchess

Keep Portland Weird, sure it’s our slogan but most people’s commitment to this idea consists of a three dollar bumper sticker; there is a weird here most don’t have the slightest idea about, a otherworldliness only limited by how much you can take in. If you allow yourself to see it, to really see it, it’s everywhere. Let’s take Jimmy for instance. Jimmy is one of my regulars, but he’s also one of a long line of religious prophets that has included Hercules, Gautama, Jesus, Muhammad, Joseph Smith, and Bob Barker. Yes, every generation or so the one true God known by many names sends down one divine sperm and—bam!—another conception bordering on the immaculate. Of course in our modern times no one believes in poor Jimmy, so he spends his afternoons driving his 1960 cherry red convertible AMC Rambler to the Poppy Lounge and drinking himself into martyrdom.

There are so many awesome and just kick ass writers in this anthology. Check out this roster:

Art Edwards, “Waiting for the Question”

Stefanie Freele, “A Sky So Blue”

Jonathan Hill, “How Do You Say Gentrification in Martian”

Kirsten Larson, “The Heft of Ashes”

B. Frayn Masters, “Queen of Tabor”

Kevin Meyer, “Out of Order”

Karen Munro, “The Color Off the Shelf”

Brian Reid, “How I Got This Job”

Nicole Rosevear, “This Many Lost Things”

Andrew Stark, “A Code for Everything”