We’re auditioning the second set of One-Acts for August. I may direct a play next month and I finished my one-act for September. I wrote about veterans suffering from PTSD and the horrible suicide epidemic. I hope it helps someone somewhere. 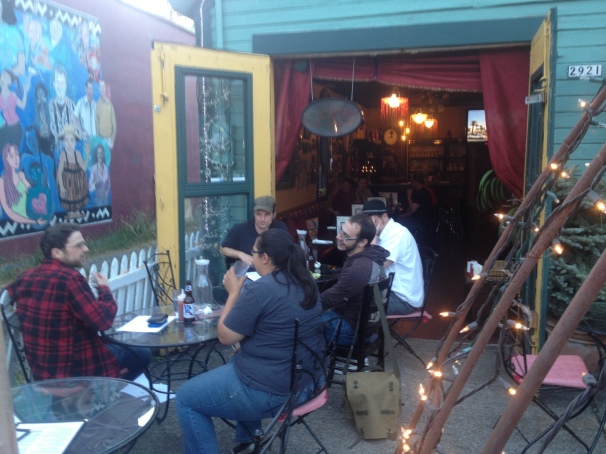 We are beginning to gather quite the crew for The Suicidalist: A Sci Fi Comedy. We’re casting it but I’m waiting on a special Portland actor to see if he can play the starring role. He’s an awesome dude, but our scheduling may conflict. I’ll keep you updated but if you like to act and you live in Portland get a hold of me. I’m sure we have a part for you.

In other exciting news I finally, finally, finally finished my waterboarding story. I tell people this story and they don’t want to believe it, but it’s true; I waterboarded people in Southeast Portland in the back of my Xterra. They paid for it too! Weird world, man. I was having such a hard time with this story, but I’m very happy with it now. That just goes to show… something. Keep working those hard stories. I’m so proud of it I want to put it all up here, but I have to send it out first.

I can’t help myself; here’s an excerpt:

Wade screams again: “Where’s your hide, American? You are going to tell me who your partner is.”

Each of the students were given a partner, a bag of extra clothes, and fake money to “hide” somewhere in the city. That way they had some information to give up during their torture session. Senseless torture has little training value, at least for the guy being tortured.

Suddenly Wade jumps up and straddles Rick right there in my backseat. He pushes Rick’s head back with his right hand and starts pouring the water on the pillowcase. The whole time he’s screaming for him to give up his partner. Rick starts sputtering and coughing violently and this gets my adrenaline pumping. It’s like a lightning storm through my nervous system and I’m alive more than I have been in too long.

In front of us, a tandem bicycle slowly pedals into a crosswalk, and I hit the brakes. A skinny, bearded man who could have been right out of an LL Bean catalogue must have been taking his eight-year-old on a peaceful Sunday ride around the neighborhood, but Wade is screaming at Rick and Rick is gagging and gurgling so loud that both the bearded guy and his kid look over at me.

I smile and nod hoping they ignore what they can’t understand.  “Jesus,” I say to Wade with a big fake smile still on my face, “maybe lighten up a bit.”