Tonight seemed like a good night to blog. I’m lucky that most of what I write finds a home in a few great places. The gun control article is still circulating and that’s super cool.

It’s good to have so much support. Here’s a quick writer Sean update: Last Friday I was on a talk show/sketch comedy on at the Blue Monk on SE Belmont put on by the improv group The Representatives. I filmed most the show and will be editing it when I have any spare time. It was a blast. I read a piece of vulgar literature called Sudsy Penguins.

Sudsy Penguins was a piece I wrote in the middle of the night while drinking a bit too much whiskey. I immediately sent it off to my writing group without edits around 2 in the morning. It’s a non fiction comedy piece written in 2nd person about one of my lowest moments during my self-destructive PTSD phase years ago. The guys in The Great Beer Flood writing group laughed at it and maybe they encouraged me a bit too much because I gave it a quick edit and sent it out. Almost immediately I got some pretty harsh rejection letters. So harsh that they were pretty funny. Not being one to shy away from rejection I gave it another edit and sent it out again. This time a friend of mine who teaches at Clackamas Community College accepted it for a new lit mag her and some students were making. She told me that I even won 50 bucks for it. This is the first award I’ve ever won for my writing since 5th grade and it was for a story that was about waking up hung over and competely naked on a strange toilet in a foreign bathroom. Great. The magazine is called From The Minds of Babes and goes to print tomorrow. Not only does it feature my story, but the cover will be me and Ketih’s painting of Bukowski. Keith’s done a cover before and I’ve done a cover, but this is the first time art we both worked on as the Brothers Davis will appear on a cover. The launch party is May 30th at CCC if you want to hear me read the story.

I’m going to slow things down a bit from here to May 30th. I tend to over book myself. I have to finish my one-act play for In Theatre’s May 15th deadline. I’m co-producing the June plays and trying to get the second Rough Men Stand Ready anthology together. The RMSR deadline will be extended because I have so much going on. Which reminds me: A Rock or Something finally got its official non profit status and we’re co-producing an amazing opera we hope to bring to Portland next fall.

That’s about it for now. Keith and I are also putting our portfolio together to get an art show. This is something we’ve really been lagging behind on. We’ve even had gallery owners tell us they want to show our art, but I’m so busy. The Brothers Davis art was shown on OPB television the other day. The story was on the owners of the Piano Fort and they showed our art on the walls and spoke a little bit about it.

And last but not least: I got my final edits back for The Wax Bullet War from Ooligan Press. I’m working on that right now in a hotel room in Corvallis, Oregon. These guys are serious. I shrank the view down to 25% so you can see the crazy track changes/edits. I need a solid ten pages of good stuff to send to a buddy of mine who teaches in Michigan. He’s putting together an NEA grant for me and a very talented Iraq War Vet poet to read at his school next year. 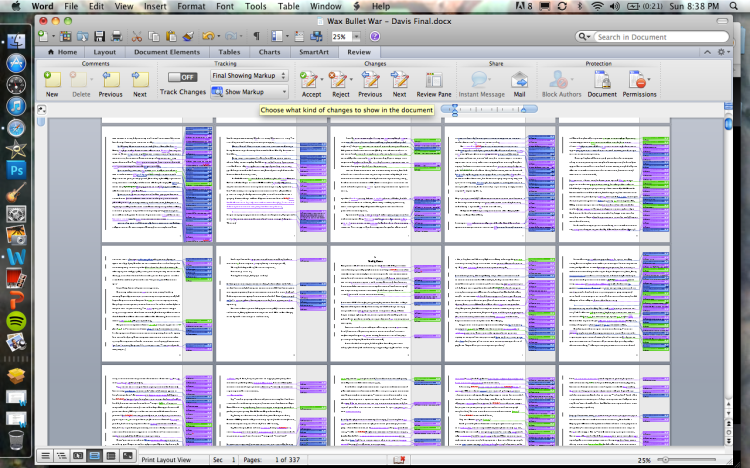 Fun stuff. I better get to it.