Ramon, Archie and I showed up first and hung out on the corner freezing in the winter sun. Ramon bought coffee and a dozen donuts from across the street. After a couple minutes Archie went, then I did. Finally I found which door to knock on to remind Papa Ferruzza to unlock the restaurant. We found the room we were to shoot in was set up for a holiday party, Christmas tree and all.

We hurriedly moved tables and chairs. Sometime in there Ben showed up with lights and cameras. Soon we were turning the pizza place into a Legion Hall. I had to make a run for thumbtacks, duct tape, and a staple gun. At one point we realized we were missing one doctors coat. Brown and Kristina showed up. We ran through my close ups, while we waited for poor Barry who was just hassled at his storage rental place for forgetting a number on the combination while trying to get the rest of his wardrobe. After doing all the close ups Archie realized I wasn’t wearing the mirrored aviators, so we wasted more time.

Oh, but finally we got on track somewhere around noon.

Setting up for Gil and Barries’ close ups 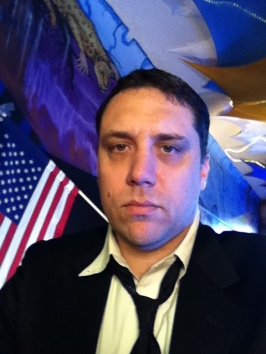 Poor Gil, he really thinks that he is somebody. He’s the gamblers anonymus guy on that billboard on 112th and Division. He’s sexual preditor no. 1 in the Nike Sexual descrimination videos they show their employees. 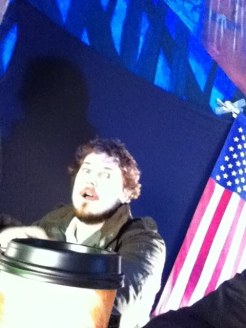 You may recognize Jarrett from such roles as Captain Freedom in S.H.A.T. Superhero action team, or Voltan in Hawk the Kung Fu Slayer. Or Slappy in Uncle Slappy and the Sarge. Or underling no. 2 in the Oregon Lotto Commercial. 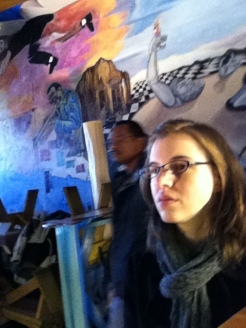 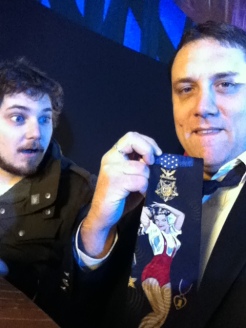 This was my incredible idea for the montage…. which was shot down immediately by the director.